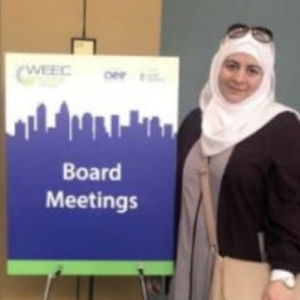 With the Association of Energy Engineers my career life has been started. Since I was an energy engineering student at An Najah National University in Palestine (2016), I joined AEE, and after some months, I won a CWEEL 2017 Scholarship, it was the first prize in my life.

After I graudated, I became the AEE-Palestine Chapter Secretary, thanks to our AEE Chapter President, Eng. Abdelnaser Dwikat, who supports me and believe in my abilities. Eng. Samer Zawaydeh, the Assistant Director of the International Membership Development for the Middle East, encouraged me to take the CEM course and exam in Jordan, and I became an Energy Manager In Training in 2017. Thanks to Eng Samer who gave me this trust and encouragement.

2018 is my Year of surprise, I had always dreamed of traveling and with AEE this dream turned to truth when I received a funded travel to attend WEEC®41 in Charlotte, NC.

AEE gave me a lot; it’s my duty to give back. I started to do activities in the chapter, opening new student chapters in other universities in Palestine and make more people in energy aware by joining AEE, in addition to local conferences and workshops.

I believe in AEE’s mission and I will work to achieve it as much as I can.