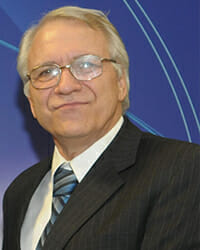 Larry Good, C.E.M., B.E.P., C.E.A., C.S.D.P., now retired, devoted his career to better energy management in order to stop global warming. To this end, Larry worked as a consultant, developing programs at home and abroad that uncovered cost-effective opportunities. In Washington he worked closely with EPA, USPS, and FEMP to improve energy management in federal facilities. Later he managed projects for US, UN and EU development agencies on three continents, mostly in the former Soviet republics. The projects demonstrated design, financing and implementation of sustainable energy projects and national policies.

For over 20 years Larry has served as an officer of AEE, developing its international network of chapters. Through most of the nineties, he was president of the National Capital Chapter in Washington. There, at the request of Senator John Glenn, he led a volunteer task force to recommend Federal energy goals and training provisions patterned on AEE courses, which went into the Energy Policy Act of 1992. He organized national conferences and other cooperative programs with FEMP. In 1999 he was inducted into the AEE Energy Managers Hall of Fame. In 2004, he served as President of AEE.

I just retired (finally!).  Now I can look back and say what I really think.  ;)  Al Thumann founded AEE when I was an engineering student, but back then I couldn’t afford either the time or the money to join.  I saw the new organization was exactly what I wanted to carry me through a career in energy management.  AEE brought all energy professionals together without bias.  AEE was pioneering and innovative but not radical or confrontational.  A few short years later I did join and never regretted it.  In the first 12 years of membership, every career opportunity came either directly or indirectly to me from AEE channels.

One opportunity was actually volunteer service to the US Government.  (Who would ever have thought?!)  Sen. John Glenn’s office called AEE, and Al directed him to our National Capital Chapter while I was president.  The Senator wanted expert advice on the first Energy Policy Act of 1992.  The Chapter quickly provided the advice pro bono to both houses of Congress.  Result:  AEE’s total CEM program was incorporated into EPAct as a requirement for the whole Federal Government.  How often does anybody get to make such a difference?