Operating the Most Photographed Fountain in the World 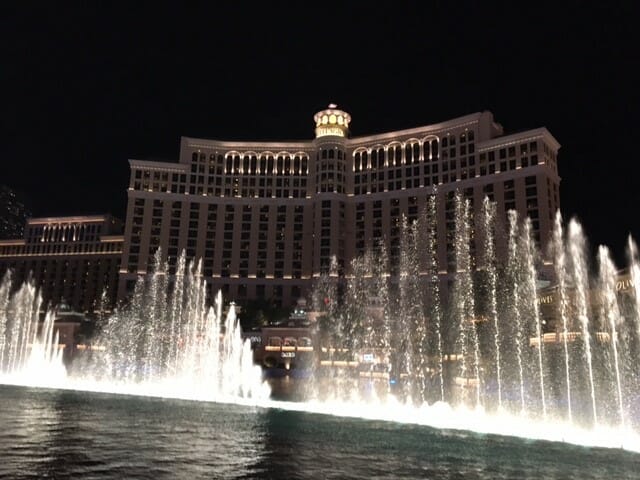 Figure 1. The Bellagio Resort with the lighted fountains as seen from Las Vegas Blvd at night.   Photo: Jeff Dix

On June 14, the Bellagio hosted a tour of the mechanical systems and special facilities for the Nevada chapter of the Association of Energy Engineers.  Room was limited, so only 20 members were registered.  We were welcomed by Curtis Briggs, Manager of Bellagio Engineering and two of his staff, Rod and Arnold.  The group was led into the lower world of the Bellagio that belongs to the chefs, wait staff, cleaning crews, and facilities maintenance staff.  We emerged on a small platform just below the hotel’s Hyde nightclub with an incredible view of the lake, Paris, Bally’s, and Flamingo.  It was a very different perspective.Las Vegas is a city of world-class landmarks.  One of the most recognized is the fountains at the Bellagio Resort.  The water dances on the surface and shoots up to 460 feet into the air in rhythm with music.  One of the 32 different 3 to 6 minute shows are conducted every 15 minutes in the evening or every 30 minutes during the day.  Crowds line up along the Las Vegas Boulevard sidewalk to enjoy the energy and beauty.

Curtis provided a brief overview of the design and construction of the lake and the fountains.  The 8.5-acre lake contains 22 million gallons of water with an average depth of 7 feet that slopes from 3.5 feet along Las Vegas Boulevard to 10-12 feet in the center to accommodate the fountain shooters.  There are over 1,200 jets and three types of shooters:  the minis shoot the water up to 120 feet; supers shoot the water up to 220 feet; and the extremes shoot the water up to an amazing 460 feet.  There are 77 “oarsman” that swirl the water in long arcs.  The show is lit at night with over 5,000 575-watt lights.  Everything is controlled in the master control room and is pre-programmed for each music selection.

The lake bottom consists of a rubber liner covered by concrete.  The oarsman and shooters are bolted to the concrete
bottom.  Construction started in 1996 and the Fountains opened in 1998.  The designer was fittingly named – Wet Design. 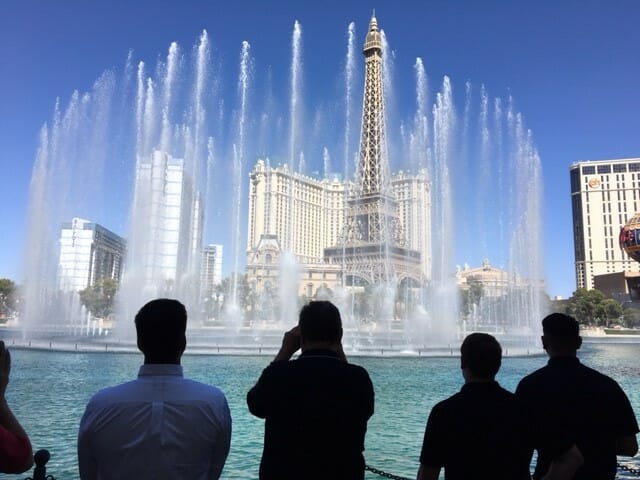 At this point, the group received a special treat – We had a private show.  The oarsman started to dance, the shooters formed walls of water, and the music was delightful.  It was a magical five minutes.  As an extra treat, the team demonstrated the fogging feature, covering the lake in 10 feet of dense fog.  If the wind had been right, Curtis could have transformed the (adjacent casino) Paris into London.  Wind is a significant factor for the operations of the fountains.  On windy days, the shooters are reduced to prevent water loss and also to avoid traffic issues on Las Vegas Boulevard.

Rod and Arnold talked about the daunting task of maintaining an entertainment center that operates every day of the year.  There is a 30-person maintenance team.  Since most of the work takes place in the water, they must be certified divers.  They have a fleet of specialized barges with cranes to lift the shooters or oarsman and bring them back to the maintenance shop.  We were invited to tour the maintenance shop, which is officially labeled as the “BAT CAVE”.  It is a boat launch inside the resort with a cave-like exit.  Rubber dinghies hang from the ceiling.  Barges are tied to the catwalk.  There is even a plastic barrier to prevent intrusion into the Bat Cave by the resident ducks. 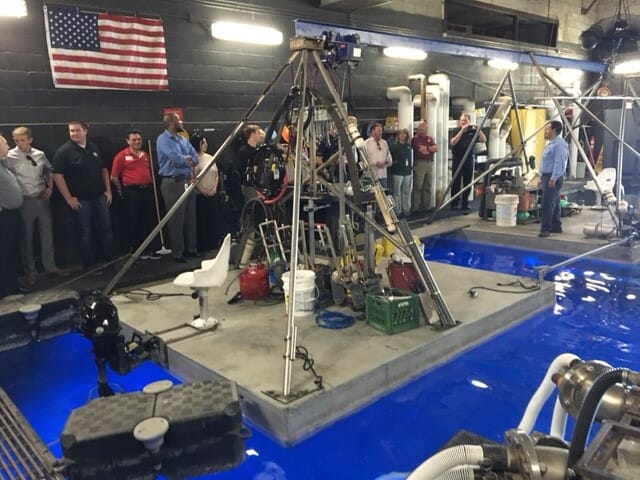 Curtis described some of the big challenges in maintaining a lake.  The lake is constantly subjected to trash, beer cans, duck droppings, and occasionally an inebriated swimmer or dust from a building implosion.  Chemical treatment can only do so much.  Also, Vegas temperatures can encourage algae growth and odors.  It was quickly discovered that a thick, green fluid was not an attractive feature at a world-class resort.   The maintenance team would don scuba gear and swim in a grid pattern to vacuum the lake bottom.  That labor-intensive effort was later improved upon with a special cleaning barge that was designed and fabricated in-house.  One side benefit of the cleaning barge is the recovery of massive amounts of coins.  It seems visitors like to toss coins in the lake for good luck.  If the coins remain for too long, it may tempt the homeless or partiers to wade into the 7-foot deep lake.  The Bellagio donates the recovered coins to charities, but recently had to take an extra step to separate the coins from the comingled debris.  They used a small cement mixer to separate the coins from the organic material, leaving just clean currency.

Rod and Arnold took us to the repair shop to look at the shooters and oarsman up close.  There were stacks of light fixtures being refurbished.  Approximately 50 to 100 quantity of 575-watt fixtures are routinely replaced each week.  The lights are used only during the 3 to 6 minute shows after dusk.  They estimated that the electricity cost about $100 per show for all 5,000 fixtures.  The lights and sound system use relatively little energy.  The major expense is providing pressurized air for the shooters, but more importantly, for keeping water out of the equipment and pipes.  That requires compressors to run 24×7, so they do use variable frequency drives to save energy.

Some of the energy saving practices employed on site included design, construction and maintenance of specialized LED light fixtures used underwater.  By creating their own fixtures, they were able to optimize presentation, light color, operations and scheduled maintenance.  Since every underwater light fixture gets maintained (removed, inspected and repaired) at least once per year, they recognize that the administrative controls (risk avoidance) and ongoing maintenance keeps their show impressive, photo worthy and consistent. 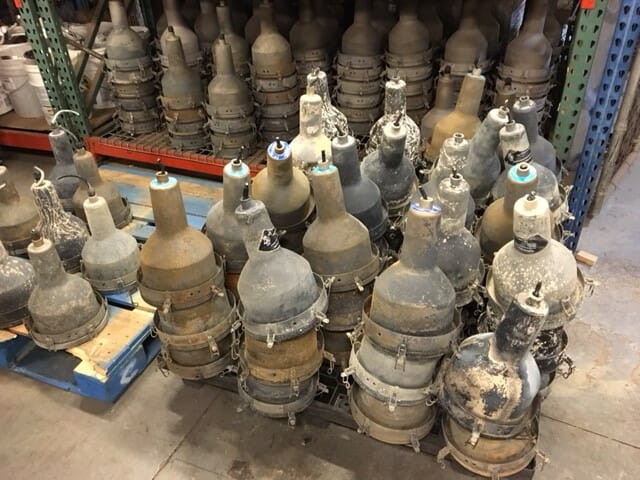 Rod and Arnold invited us to the tour the compressor room.  It reminded us of a scene from Star Trek.  We had to hike the underground corridors, past utility rooms, restaurant service entrances, and stacked furniture.  We finally came to some big doors, put in our ear protection, and entered the equipment room.  It was row after row of big air compressors and control panels – 12 Sullair compressors, 100 HP each and large high pressure air storage tanks.  It was the warp drive for the fountains.  The slow start process for taking the compressors (used to power the fountain jets) up to full capacity operations is a technique that recognizes the peak load pricing of power use, and the load on the equipment (loss reduction).  By improving this part of the operations, they have saved energy, decreased maintenance costs and seen more consistent performance.  Variable frequency drives used in the compressed air generation process were installed in a retrofit and allows staff to ramp up and down the motor output used on property.  This energy conservation technique pays off in perpetuity. 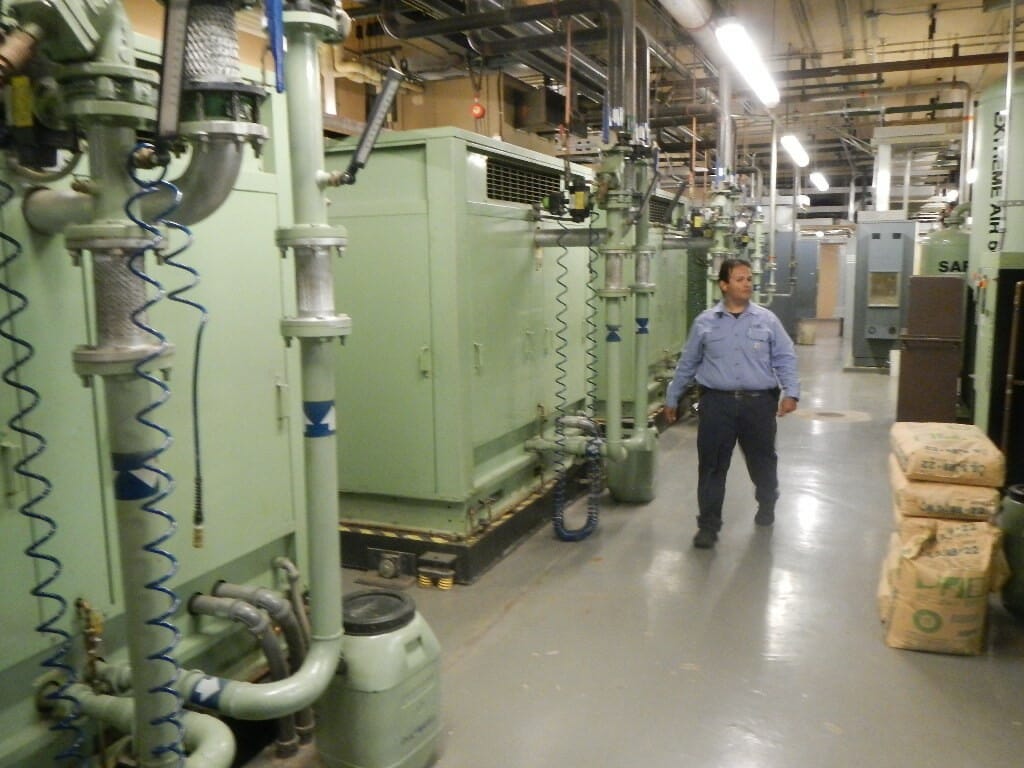 Figure 5.  The air compressors provide high pressure air for the water cannon and medium pressure air to keep water out of the pipes. Photo:  Dennis Wike

That wrapped up the tour.  We returned to the Bat Room and James Stein, chapter President, thanked the Bellagio team and AEE chapter members.  “Every time we drive down the Strip and see the Bellagio fountains, we will all be thinking about the Bat Cave and the wet team.  Thank you for a giving us the opportunity to see this up close and for our private show.”